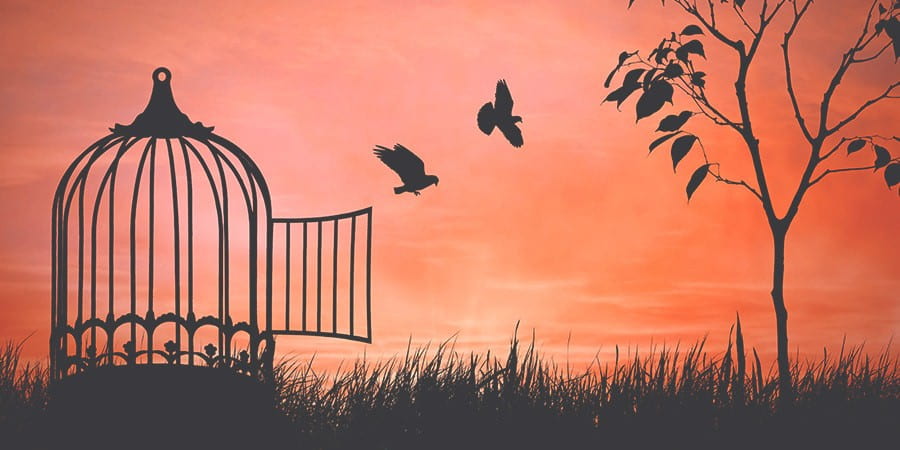 Millions of peoples in our history have been overshadowed by the dominance of others. However, their absence in our books has left us with some undiscovered and unheard. This anthology of poetry is dedicated to centuries of submissive women, and other souls that yearned for an inkling of freedom but were met with oppression and ignorance. 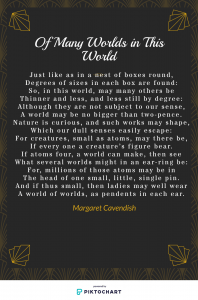 This was a poem published during the Elizabethan Era by an educated female aristocrat. She was well-read on topics that were usually meant for men and enjoyed philosophizing as well. This poem is one of her most well-known because it shows female empowerment and the potential women have to do great things. I liked this poem because of its implied feminism. 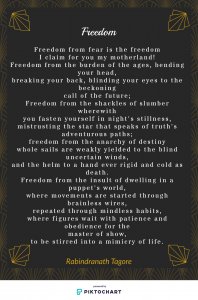 Rabindranath Tagore is a famous Bengali poet that wrote during the conflicts in the Indian subcontinent. India used to include Pakistan and Bangladesh in it, but in 1947, it separated into East Pakistan, West Pakistan, and current India. In 1971, East Pakistan separated from Pakistan to become its own country, Bangladesh. This century of conflict brought aroused the desire for freedom because the people had grown tired under British rule. It is a call to action so the people will not bend their backs anymore, and fight for their liberty. This poem hit me because it came from my ethnic roots and history. 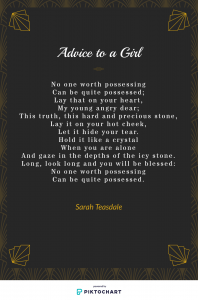 Sarah Teasdale married a man who was always away on business trips and rarely spent time with her. This poem is a reflection of her own life of misery because she failed to get the attention of her husband after they married. Therefore, she committed suicide by overdosing on pills, knowing that “No one worth possessing can quite be possessed”.  I enjoyed the idea of being confident with one’s self, but the cold truth of loneliness that comes with it.  It is a piece that shows the sad endings of being worth too much. 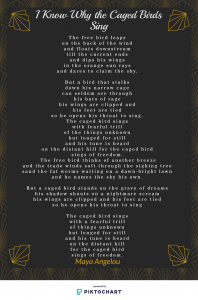 Maya Angelou is a poet and a civil rights activist. This poem, like her other ones, shows how the presence of freedom allows for power and confidence, while its absence brings fear and uncertainty. The metaphor of the birds and the cage created very vivid images that I appreciated. She was alluding to slavery and the hidden potential that African Americans had. Because they were trapped, however, becoming unshackled was their only goal in life. 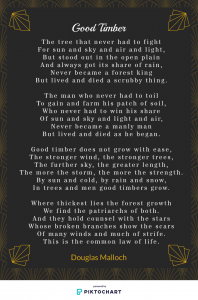 This poem does not directly address feminism or freedom. However, he shows that those who have to fight are more resilient and courageous than others. When oppressed, some no longer question its presence and become submissive, but more often than not, they learn and overcome. The life-changing power of hardship allows for the acceptance of their past. I like how the poet uses nature to make his point; the last line is also an undeniable truth that one must contemplate. 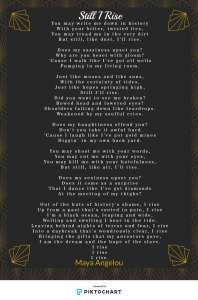 There is a feminine flair that dominates this piece. It shows that women will stand tall to all of the “bitter, twisted, lies” that are written about in history books. It also shows the liberty of self-confidence in the face of an adversary. There is a hint of African American pride in the phrase, “a black ocean”. I also like how she makes the color black something beautiful, and worth admiring. The repetition of, “I rise” in the end sums up the message of the entire poem skillfully as well. 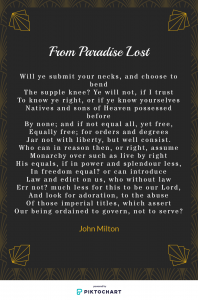 This portion of Paradise Lost is daring the people to submit. He warns that if they choose to follow orders, then freedom will not be an option anymore.  It plays with heaven and hell, and the injustice of the monarch in the way he claims equality, but orders them around. I think this is in the point of view of the angels, who wish to serve the Lord, but is told to take care of the earth. 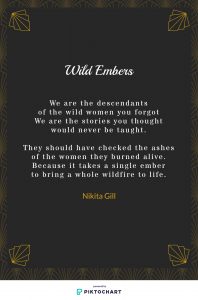 This short, but meaningful poem shows the power of women as a collective. Their ancestors were burned to ashes, and present-day women are the warriors that must avenge them to honor their sacrifice. The embers represent the voice of one individual that had aroused the anger of the entire group. The poet points out that not everyone will be silenced and it is futile to even try to do so. I loved the imagery of fire in here to show passion and desire. It gave me a feeling of pride and striving for justice. 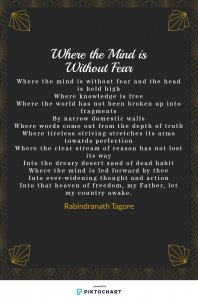 Tagore is calling out against submission. He sees everyone hidden behind walls and implores them to seek truth through action. He shows that his people view freedom as heaven, something that is unreachable in this mortal world. I like the phrase, “The world has not been broken up into fragments.” It shows that people are not connected anymore, and therefore try to conquer and take away freedom. He asks for God to open his people’s eyes so they see their circumstances and do what is required to be free again. 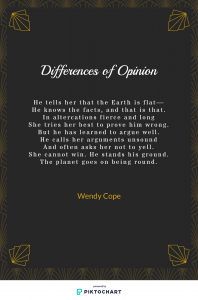 This poem shows the misunderstanding between genders. Although women did not discover that the earth was round, the poet is trying to show that in the past, whatever man had said was deemed right. Regardless of all the logic and reasoning women show, they will continue to believe in their fallacies. Regardless, the truth will always prevail. The poet shows that many women were shut down by men who called their thoughts invalid. This begs the question: how much unknown could we know now if everyone had a say?