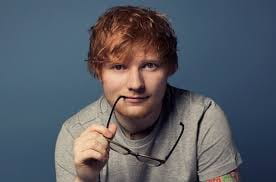 “SUCCESS IS THE BEST REVENGE FOR ANYTHING.”

Ed Sheeran was born on February 17, 1991, in a small town called Halifax, England, but his family soon moved to Framlingham, Suffolk, where he essentially grew up.  Playing the guitar at a young age and writing his own songs, Ed Sheeran knew music was for him.  Even though he only has one eardrum, Ed has always loved the harmonies and the feeling that music has.

He says that it was not easy being a redhead, because he was immediately deemed as ugly.  He had many quirks, but these differences, in the end, helped him become the person he is today.  He used to have a stutter, and after he started focusing on his music, and really getting those Eminem lyrics down, Ed’s stutter vanished. At 14 years of age, he headed to London for the summer, with his guitar and a backpack full of clothes, and his musical career took flight.

Now he as a wife, Cherry Seaborn, and they have been married for two years now, but has never really like being public about it.

Rhyming →  allows for the song to have a beat that cohesively brings the piece together.

I feel Love in this Newfoundland flat

Only God knows where I found it at

Maybe faith pulled me into the pub

Just to meet someone who’d give me their love

I just liked how you kissed me like that

Imagery →   is to put vivid feelings into the listener’s mind, so they see a picture that evokes a specific emotion every time they listen.

Baby, I’m dancing in the dark, with you between my arms

Barefoot on the grass, listening to our favorite song

When I saw you in that dress, looking so beautiful

I don’t deserve this, darling, you look perfect tonight

Metaphor → a comparison that adds to the image, but the difference is that there are greater implications to living life within these images that the metaphor reinforces.

What do I Know?

You know we are made up of love and hate

But both of them are balanced on a razor blade

Girl, you know I want your love

I may be crazy, don’t mind me

Say, boy, let’s not talk too much

Grab on my waist and put that body on me

I’ll paint the picture, let me set the scene
I know, I’m all for people following their dreams
Just re-remember life is more than fitting in your jeans
It’s love and understanding positivity

We could change this whole world with a piano
Add a bass, some guitar, grab a beat, and away we go
I’m just a boy with a one-man show
No university, no degree, but Lord knows
Everybody’s talking ’bout exponential growth
And the stock market crashing and their portfolios
While I’ll be sitting here with a song that I wrote
Saying love could change the world in a moment
But what do I know?

Throughout the entire song, there is a solid rhyme scheme.  Each phrase in the first stanza rhymes except for the last line, allowing it to hit harder.  The second stanza does a similar thing, but the second to last line stands out.

For imagery, we are giving an overarching image of loneliness.  This is done by using words like “I”, “We” and “They” to create a comparison between him and the rest of the world.  It is reinforced with the image of, “Everybody’s talking ’bout exponential growth, and the stock market crashing and their portfolios.”

Metaphor is used skillfully in this piece.  The idea of the piano, bass, and beat to “change the world” is saying that there are much simpler ways to make a difference.  The idea of “fitting in your jeans” shows that people spend most of their life attempting to conform to the expectations set out for them.  “One-man show” adds to the image of loneliness as well.

There is the repetition of the word “love” in these two stanzas, making it the main idea.  However, this piece does not literally repeat most of the time.  In the first line, there is alliteration in “paint the picture” and “set the scene”, and choosing to say “re-remember” instead of “remember”.  He has pockets of repetition in other forms.

I have been listening to Ed Sheeran’s music for a long time and I appreciate the following: