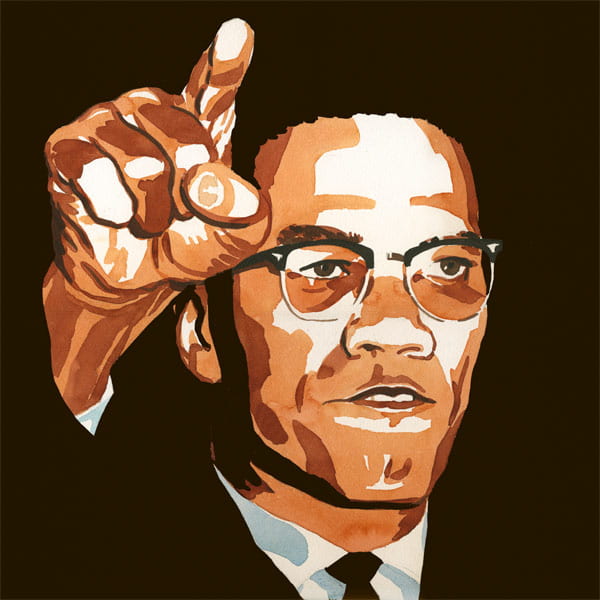 “So early in my life, I had learned that if you want something, you had better make some noise.”

Those were the words in Malcolm X´s autobiography, as told by Alex Haley, that disturbed the inner workings of my nature without me even realizing it. I could not seem to understand how someone could say something so unflinchingly direct but boldly honest at the same time – if an individual is unable to speak up for their needs and wants, they can not expect the world to listen. While a thirty-year-old man can live by this motto with confidence and ease, I, at the mere age of sixteen, became incredibly uncomfortable placing these words among the backdrop of my life experience.

Before this pandemic grew exponentially, I read Malcolm X´s life story in February because I – with my two group members – were to lead a book club at the end of the month. Picking up this book, I had imagined it to be one of those stories that highlight the individuals in our news, politics, and history books as an ideal image we all like to believe.

For some reason, we see those in positions of power as mythical heroes and demigods rather than regular people. It provides us a sense of security – false security even – that no matter how nobly we steadfast to the forces of destiny and circumstance within our lives, we will never reach their potential – then, we resort to doubting ourselves, subconsciously letting go of hope. We think: I cannot be the next Mother Teresa. I cannot be the next Shakespeare. I cannot dream of belonging among the thousands of people who grace my eyes as model members of the human race because the probability of that ever happening is next to impossible.

Reading Malcolm X´s autobiography, however, did two things for me. Each chapter of searing honestly was like taking a hammer and swinging at a marble statue until the broken pieces revealed a beating heart. The humanness of his voice made it feel as though I was a part of his life rather than a passive observer – I was a piece of his hostile soul, aggressively rocking back and forth with the blows of his hardships and the highs of his happiness. It overwhelmed me to get such a thorough view of someone who I would have glanced over in an article or magazine.

His days of drug dealing on the streets of Harlem trying to make ends and hopping from foster home to foster home while his mother rotted away in mental institutions showed me that Malcolm was not always the esteemed character of his later years. This powerful man, who was known to flip minds with the choreography of his words, used to communicate his thoughts with a handful of curses. Yet in jail, he managed to build his impressive vocabulary by reading dictionaries underneath the dim light of his jail cell. When his English teacher discouraged his desire to pursue law, he dedicated his life to social justice and social issues, fortuitously defending his point of view from journalists that threw questions at him like bullets. He tore off any facade of kindness and traded it for honestly, ultimately rising to be one of the most influential leaders of the Civil Rights Movement that took over in the 60s. It was his honesty that made me uncomfortable.

A visible fault is better than a deceitful cover-up, and being immersed in his life story forced me to confront this fact. I felt as he put me in front of a mirror and slowly chipped off my porcelain face, revealing my dry and cracked skin underneath. It was painful seeing how I was lying to myself and others in many facets of my life and I knew that this knowledge could not be erased. I could not pretend that his words, ¨We cannot think of being acceptable to others until we have first proven acceptable to ourselves,¨ did not leave a bruise on my self-image and worth. After finishing his book, I was scrambling to put the pieces of who I was and who I wanted to be together.

I reflected then, pondering on instances in my life where I took the easy path of deception to maintain a facade of someone ideal – someone who can connect with everyone because they are kind and well-liked. Reading his life story was like delving into a mindset that was so foreign to me, but somewhat understanding it at the same time. He showed me that having an opinion, as long as it is backed up by valid evidence, is praiseworthy. Sharing it, although it comes with fierce opposition, is how an individual becomes known by the world. Genuine leaders in history – the ones who accomplished something noble for the human race – are ones that refused to conform to the ideals and truths of their society without questioning and comparing them to their preset morals and beliefs. If need be, they were always willing to shift their paradigm to get as close to the real truth: one that remains ironically untouched by humans. Yet, while people dedicate their entire lives to battling deception and conformity to corruption, I found myself giving in so easily to avoid discomfort. Malcolm X, however, does a brilliant job of making people uncomfortable, which forced me to stop. To analyze. To take in my surroundings and truly consider the line between good and evil, and ultimately grow from the experience.

Although the focus was African American nationalism, and although I may be missing the entire point of his legacy with my analysis on the subject, his story acted as a self-help book for me rather than a historical account. Mental pictures of Malcolm in interviews filled with journalists who threw questions at him like bullets took me out of my shell of passivity and threw me into a path of prudent opinion-making. His work ethic and need to build the organization into something worth talking about hardened my need to ingrain perseverance into my nature. Lastly, the humble admittance of his past of promoting radical ideologies, and then working towards amending his image without his ego getting in the way showed me that effective versus egotistical opposition need to be balanced with a careful hand. Malcolm X was a man with high character, and I revere him for his strength.

Malcolm once said ¨All of our experiences fuse into our personality. Everything that ever happened to us is an ingredient.¨ This book was one of those special ingredients in my (short) life that catalyzed the need to work on my character and conscience. Just like how ¨the ability to read awoke inside of [Malcolm] some long dormant craving to be mentally alive,¨ I wish for the search of honestly in my day to day activities be like an insatiable desire that can never be quenched but rewarded.

I am forever grateful that his story came into my hands, and I hope that it continues to change people in the way that it changed me.